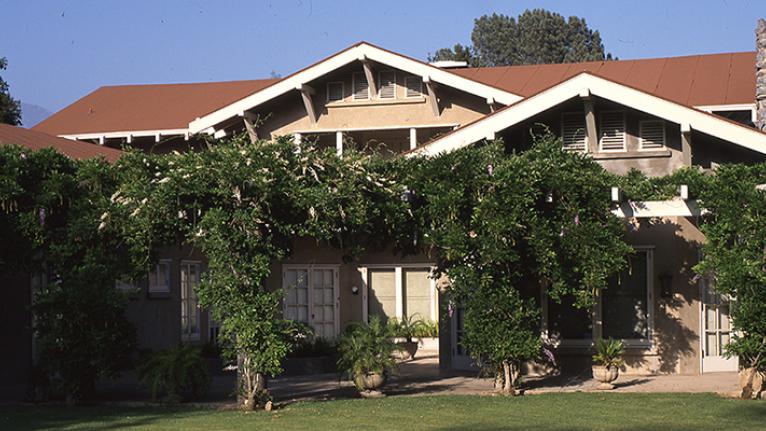 Reservations are required for tours of the Lanterman House; please call for reservations and for use of archives, 818-790-1421 or https://www.lantermanhouse.org

The Lanterman House Archives preserves and makes available a wide range of materials pertaining to the history of the Crescenta-Cañada Valley for the historical and cultural education of the City of La Cañada Flintridge, the Greater Los Angeles Area, and the State of California. Major collections include the Lanterman Family Papers, the Frank D. Lanterman Sheet Music Collection, and the Local History Collection of the Crescenta-Cañada Valley and La Cañada Flintridge. The Archives also house the political papers of Frank D. Lanterman, whose 28-year career as a California State Assemblyman yielded significant advances for the rights of the developmentally disabled as well as water rights for unincorporated areas. The Lanterman House Archive's series of 45 oral histories bring the area to life through interviews with residents and local historians on topics ranging from education, to water rights, to the Jet Propulsion Laboratory. The Lanterman House, owned by Dr. Roy and Emily Lanterman, was designed by architect Arthur Haley in 1915 and features a U-shaped Mexican Colonial hacienda design. The house's interior, which is completely restored and decorated with English Arts and Crafts design elements, includes its original furnishings. Now a museum, the Lanterman House is open to visitors for tours.

The Lanterman House and the Roy S. Lanterman Family

Dr. Roy S. Lanterman’s parents initially settled in the Crescenta-Cañada Valley in 1875. After practicing as a doctor in Los Angeles, Roy decided to return to his childhood town with his wife and two teenage sons. His wife Emily was from a wealthy Santa Monica family and was reluctant to move out to the rural and isolated location. This lavish house, which included many modern conveniences, was Dr. Lanterman’s way of persuading his wife that life in La Cañada could still be comfortable. He even included a ballroom on the second story of the house.

Dr. Lanterman was particularly interested in building a concrete house not only because of the high risk of fire from the native chaparral surrounding the property, but also because he had seen firsthand the dangers of fire while running an emergency hospital in San Francisco after the 1906 earthquake.

Roy and Emily Lanterman lived in the home from 1915 until their deaths in 1948 and 1949, respectively. Their son, Lloyd, was a mechanical engineer who was known for designing race car engines. He left the family home and all of its original furnishings to the city in 1987. His brother, Frank, was an accomplished silent movie organist until “talkies” ruined that gig. In 1950, he was elected to the California State Assembly and he became a well known and powerful politician who, among other things, championed the rights of the developmentally disabled and mentally ill, authoring landmark legislation that acknowledged their rights and provided them with state services.

The Lanterman House was opened as a museum in 1993 after undergoing years of exterior restoration using money raised by the museum foundation and through both city and state grants.

Childhood, Love, and Life in La Cañada: Meet the Brockmeyers

It is often said that La Cañada Flintridge is the ideal spot to live and raise a family. Neal and Molly Brockmeyer are surely a prime example of the fairy tale La Cañada couple. They first met in kindergarten at La Cañada Elementary School in 1944 and continued together through to La Cañada Junior High and graduated from John Muir High School. As children, Neal Brockmeyer and Molly Busch played in the La Cañada of the 1940s, when agricultural crops dotted the landscape, there were few stores, and empty lots were in abundance to play in. They were members of the first class to attend La Cañada’s newly-built junior high school in 1951, immediately participating in student government, sports, and community service organizations.

Neal attended Stanford and became a lawyer and Molly attended the University of California, Berkeley, where she received her elementary teaching credential. They married in August of 1961 and would later have three children. When Neal got a job in the Los Angeles area, the couple returned to La Cañada, where Molly taught at La Cañada Elementary School in the same classroom where she attended third grade.

The Brockmeyers have dedicated themselves to serving the La Cañada community. They have played significant roles in numerous organizations, including the PTA, the La Cañada Flintridge Educational Foundation, the Assistance League of Flintridge, the Lanterman House, St. George’s Episcopal Church, and the La Cañada Trails Council, the YMCA of the Foothills, and the LCHS PTSA. In 1994, the couple earned the “La Cañadan of the Year” award from the Kiwanis Club of La Cañada for their many years of community service, leadership, and active work in improving life in La Cañada Flintridge.